Running through a glacier valley, Transfagarasan road delights riders with one of the most impressive views of the Carpathian mountains and offers an incredible variety of landscape in just 150 km: waterfalls, lakes and a water dam, all surrounded by stunning peaks which are snow-covered up to late summer. With an abundant flora and fauna, it is not uncommon to spot bears and chamois goats. The altitude gain of the road is ~1500m up to 2034m altitude, making it the 2nd highest motorable road in Romania after Transalpina road which also allows the road to be open only during summer. Dozens of hairpins, 5 tunnels (including the longest tunnel in Romania, 884m) and almost 30 segments of suspended road will offer to any rider joining our Best of Carpathian Mountains guided tour plenty of adrenaline and fun to make this an unforgettable experience.

Nominated by tourists as “The Diamond of the Carpathian Mountains”, Transalpina has an altitude gain of ~1800m and is the highest motorable road of the Carpathian Mountains, reaching 2145 m in Pasul Urdele. Initially build as an army road during World War II, Transalpina remained mostly a mountain off-road route until 2007 when the road was consolidated and opened for access; this ‘lost in time’ atmosphere and the wild nature is where the charm of Transalpina comes from. Having a total length of 145 km, the winding road offers countless curves to satisfy any rider while fully enjoying the amazing landscape of centuries old forests and alpine peaks dotted by sheep flocks. Book your seat in our Best of Carpathian Mountains guided tour and enjoy this amazing road to the fullest!

Meaning Troll’s Wall, it is both a breathtaking and difficult road to drive. Starting from sea level, Trollstigen rises up abruptly to 700m in just few kilometers, making the narrow 11 hairpins that have a steep incline of 10% a challenge for the rider. It took 8 years to build and since it opened in 1935, helped by the 300m tall waterfall near the top, it became a magnet tourist attraction. A nice surprise awaits at the top, where a panoramic viewpoint was built 10min away from the car park; the view of the deep fjords and the greenery of vegetation will add up to the incredible views of Trollstigen.

An engineering jewel, Stelvio pass is about 50km long from Stelvio to Bormio and even if it was built almost 200 years ago  to connect Lombardia with the Austrian empire, the present road follows the original old one almost identically to reach the 2757m maximum altitude, which makes Stelvio the 2nd highest road in the Alps. Stelvio has 65 hairpins in total, out of which 48 are on the northern side which ascends more abruptly (1800m altitude gain, 7.4% incline) to offer the rider an very intense experience; Stelvio’s hairpins are full of adrenaline and sport history, as the road has hosted several Giro d’Italia bicycle race competitions, and even experienced riders approach it with caution. Top Gear show declared it the greatest driving road in Europe, only to change this later and crown Transfagarasan road in Romania as the definite No 1.

Part of an UNESCO site, the Tara canyon (Kanjon Tare) offers a fantastic journey back in prehistoric times and holds several records worth adding by any rider. With 1300m at its deepest and over 80km long, it the deepest canyon in Europe. The soft limestone bed in which the Tara river has been carving for millions of years offers a unique landscape: over 40 waterfalls, over 50 peaks above 2000m, gorges, caves all hidden among dense forests (centuries old 50m tall black pine trees are not unusual to find here). Tara is a furious river, making it a great choice for rafting; another top attraction is the bridge at Djurdjevica (135m height) finished in 1940 where a 350m zip line is waiting for adrenaline enthusiasts who want to “fly” over the canyon at over 50km/h. We have included Tara canyon in our Explore the Balkans guided tour which is designed to offer you a unique and memorable experience.

The pass lies on a major road connecting Zurich with Lugano. Since the first road opened in 1830, several upgrades have been operated to support growing traffic: a 15km rail tunnel opened in 1882 (which remained the longest in the world until 1906), a road tunnel opened in 1980 which helped reduce traffic on the old road and in 2016, the longest rail tunnel in the world (57km). The old road keeps its charm, the turns are still covered with the original cobblestones. At the top, 2016m, you can admire the several lakes (the largest is Lago della Piaza) and also the museum which has a lot of info on the history of the road. The pass is open only on daylight during Jun-Oct.

What makes Col de Turini one of the greatest driving roads is not its top altitude of 1604m or the 24km length but how dangerous and difficult the road is. Both Monte Carlo Rally and Tour de France sport competitions have used Col de Turini to test the skills of the best sportsmen in the world. Search it on Google Maps and you will be shocked by the crazy spaghetti-looking map! Fast changing weather, vertical drop views on your side and the 34 hairpins to the top will test your riding experience and pump up the adrenaline to new levels. Col de Turini links La Bolene with Sospel (main road with an incline of 5.1%) but there is also the sout-west D2566 road with a steeper 7.2% incline.

The Atlantic Road is a marvel of engineering: only for planning, it required 13 years. The 8.3 km road connects several islands and is subject to extreme weather conditions, the frequent ocean storms make it one of the toughest roads that exists in Europe. But the danger of riding on a road which is almost as close to the Noth Pole as Iceland is rewarded with incredible views of the mountains and the ocean, offering a once in a lifetime experience. Additionally, the road has 8 bridges and the most famous is Storseisundet, which is also the longest of them with 260m. It has been features in several advertisements especially because it’s architecture creates the optical illusion that the bridge disappears up in the sky.

Running along the longest and deepest canyon in UK (138m), Cliff road has 23km an offers one of the most spectacular roads in UK. The canyon was formed at the end of the last ice age by melting glaciers and the road follows it with high fidelity through the massive rocks. With 22 sharp turns, and an incline that reaches a  steep 16%, riding through the narrow curves guarded by the impressive white sides of the canyon will be a superb experience.

The Great San Bernard Pass, running from Martigny (Switzerland) to Aosta (Italy) is among the most scenic in Switzerland and is not to be mistaken with Sand Bernardino Pass (connecting Hinterrhein and Mesolcina in Switzerland). Since first being used in the Bronze Age and later by the Romans, the pass is full of history: in 1800 Napoleon used it to cross his army into Italy. But the best story is probably the one about the St. Bernard dogs: around 1050 BC, Saint Bernard of Menthon was running also a shelter for travelers and given the harsh conditions (in winter snow can reach 10m height) special dogs started later to be bred and trained for search and rescue of travelers and so by 17th century, the huge St. Bernard dogs we so much love today resulted (and no, the famous whiskey barrel under their chin is not true, it is only a nice legend). 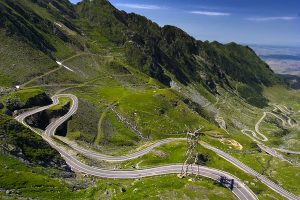 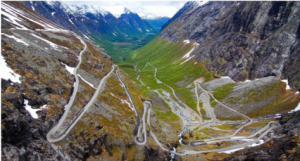 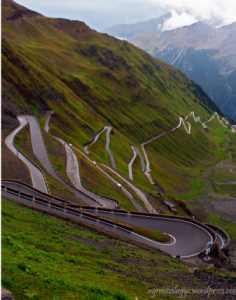 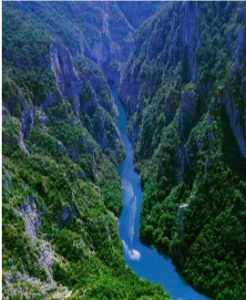 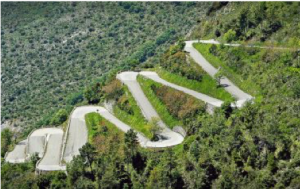 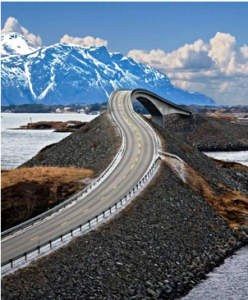 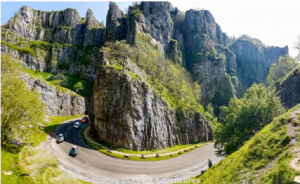 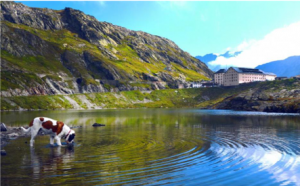